FYI: this post refers to WebStorm 9.  Although the same approach should work with WebStorm 10, I found that WebStorm 10 already had a watcher set up for Babel.

So I decided to start working on a project combining Node and Aurelia, kind of a MEAN with Aurelia as the A.  I’m coming from a .Net background, so I’m on Windows.  I tried out both WebStorm and Sublime and was really drawn to WebStorm based on my familiarity with many of the shortcuts I’ve used forever in ReSharper.

So now I’m using WebStorm and I want to develop using es6.  WebStorm comes with a transpiler plugin (basically a file watcher) for Traceur.  I’m sure Traceur works great, but Babel has gotten a lot of good reviews and in addition Aurelia uses 6to5 (old Babel) out of the box, so why not stick with the same thing.  So I wanted to set up Babel as a custom file watcher in WebStorm…here’s the easy way to do that.

So in order to run a WebStorm command, at least in windows, it has to be an exe, bat, or cmd file.  So add a new file to the root of your project and call it “runbabel.cmd” with the following contents:

This tells Babel to run with any arguments passed in.  Make sure to **not** name the command babel.cmd as it will just call itself in a tight loop instead of calling the Babel CLI.

Now in the main menu, select File –> Settings…  From the resulting popup, go to Tools –> File Watchers and click the + button to add a new watcher. 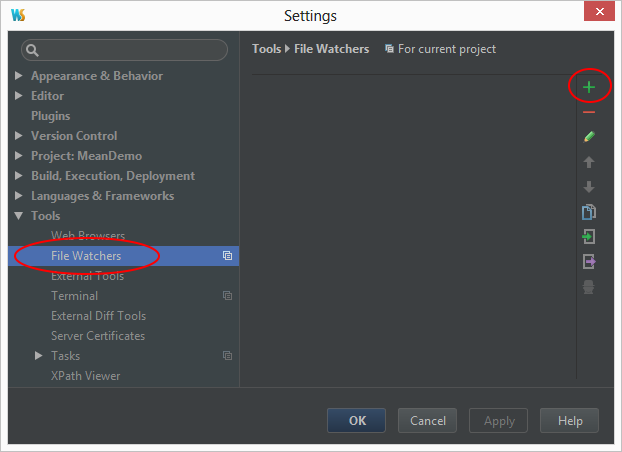 From the resulting modal, set up the watcher with the following settings: 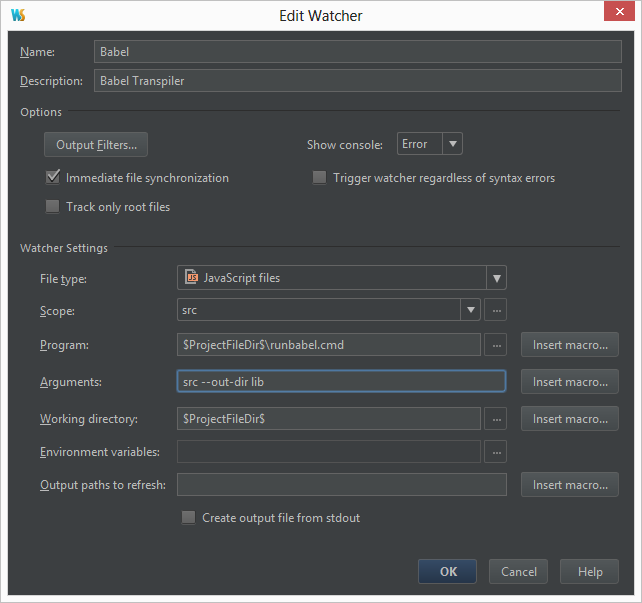 Next, we’ll talk about how to set up the transpiler using gulp instead of a file watcher.